Who do I vote for to get the best chance at Amalgamation?

Of course, George Pringle of Amalgamate North Van is a given for Mayor but what about the rest?

Being open to the provincially mandated process on amalgamation and a dedication to a North Van amalgamation (not a North Shore amalgamation including West Van) is the most important.

If you want to support the best path to achieving some progress on amalgamation this are the City Council candidates Amalgamate North Van recommends:

Advanced polls start on 5 Nov, see the City Website for details.  Of course, November 15th is election day!  Voting from 8 to 8.
Posted by Unknown at 9:40 PM No comments:

The endorsement of candidates

Most of us like to stay within the law, with the exception of candidates in the upcoming municipal election, regarding endorsements.

Legally, there can be only one way to "endorse" a candidate:

1)  An electoral organization registered with the Elections BC must submit to Elections BC a form endorsing a candidate(s) and that candidate sign accepting the endorsement.

ACTIONS SPEAK LOUDER THAN WORDS - This is what I've done and am the first and only candidate in North Van to honestly display this in front of the voters right on the ballot.  I hope to SHOW how candidates will cooperate in future, not by just talking but taking personal action

Posted by Unknown at 9:53 AM No comments:

An "Amanda" (appartently not Nichol) posted a comment on the VOICES Collective blog. It follows:


That leaves the District of North Vancouver, they are the only ones who keep pushing it… now ask yourself, why is that? Laymans terms, they will pay considerably less while the city of north vancouver and west vancouver offset their costs.

1) District Councillor Doug MacKay Dunn is speaking for a minority faction on District Council.  He and Councillors Little and Muri voted for a referendum this fall on a North Shore amalgamation.  I wrote to District Council explaining to them that including West Van would be a poison pill in the City.  Doug's motion failed. The Councillors voting against mentioned the inclusion of West Van as the reason they could not support this motion. Councillor Little will not be on Council as he is not running for re-election.  I have publicly called to District voters who support amalgamation not to vote for Doug MacKay Dunn as he is hurting the North Van amalgamation.  Actions speak louder than words, Amanda!

2) A North Shore amalgamation is stupid for both the City and District of North Van.  West Van pays $600 more per average resident than does a average resident of the District who pays $30 more than a resident of the City. Trying to muddy the issue by including them in your rant is very dishonest and deceptive of you, Amanda. I never want to see where you pulled your financial analysis that concluded the District would be a financial drain from.

3) The District has a debt of just over $20 million for two Rec Centers (Grant Connell & William Griffin) which will be used by City residents, the City has just incurred a debt of $12 million for the Lonsdale Energy Corporation expansion of questionable benefit to its customers solely in the City. Basically the same per resident and that's before the City goes further into debt to reno the Harry Jerome Rec Center. $50 million plus?

Posted by Unknown at 8:07 PM No comments:

The District of North Vancouver has struck the North Shore Reunification Review Committee in early September.  It is a hurried committee with little information available online.  I don't view it as a real committee but something run out of Councillor Doug MacKay Dunn's pocket.

I have not given this committee much thought.  I did not even apply to be on it as it ignores the official process set by the provincial government and the inclusion of West Van into the process makes it certain that it will never pass a referendum in the City.  Kerry Morris, a anti-amalgamation candidate did and was refused.

The information gathered was supposed to be the foundation for a fall District only referendum but timelines dictated that the Council would have to pass an authorization.  It failed, Councillors voting against it mentioned the inclusion of West Van in a negative manner so it seems that MacKay Dunn's unhealthy fixation killed the referendum.

Good.  Some people worried why Unite wanted to run Council candidates in the District and this is the primary reason.  We will never have amalgamation as long as Doug MacKay Dunn is on District Council.  District voters do us all a favour and don't vote for him and his fixation of merging with the expensive West Van that would increase the North Van taxes.

The list of committee members didn't even have a chair listed but here they are from a 9 Sept press release:
A majority of District members (6)
James Ridge (Former City Manager of the District)
Helen Goodland, Architect (DNV/CNV) -why is she described as both?  She lives where?
Bob Boase, Consultant (DNV)
Greg Lee, Retired President Cap U (DNV)
Mohammad Afsar, Retired Engineer (DNV)
John Hetherington (Retired Accountant (DNV)

I tried to attend meetings to no avail.   I tried to ask to make a delegation to this committee, again to no avail.  This is a committee subject to all the laws of BC and proceeding rules passed by District Council not just to rubber stamp what Councillor MacKay Dunn has had in his pocket right from the start.

Posted by Unknown at 1:33 PM No comments:

I met with former Councillor and fellow past candidate for Mayor, Bill Bell, yesterday although I must point out that he was a heck of lot closer to victory than me.  He may be interested to know that his old opponent Barb Sharp is behind current candidate Kerry Morris.

In December of 2014, the City Council and the District Council must pass (4 votes) a motion to officially notify the Provincial Government they are jointly starting an amalgamation process.  "Be it resolved a joint committee be struck with the City/District to write up an Amalgamation Plan which will be reported back on in September of 2016.

From December of 2014 to September of 2016, the Joint Committee would form many working groups of sub-committees to work out the many details.  They would also be empowered to commission independent studies on how to do amalgamation in the least expensive way.

As one example, there would have to be a sub-committee on the Lonsdale Energy Corporation. It  is a City initiative but the District has turned down any participation in the LEC. So this sub-committee would have to make a recommendation on whether the new united North Vancouver would own the LEC or it would be sold?  The point is that with this and as with many other issues, have to be discussed as part of the building of a detailed Amalgamation Plan, not prior to the to the motion in Step One.

Once the Amalgamation Plan is delivered to the Provincial Government and they have authorized a binding referendum for October of 2017, the voters of all of North Van have a year to study the plan and then vote on it. If successful, during the regular election of 2018, there would an election for one North Van council.
Posted by Unknown at 3:18 PM 1 comment:

A meeting with Bill Bell on the state of the world

Of course our world is North Vancouver since both of us will be running for Council.  It was a pleasure talking fine points of electoral strategy and showing some of my analysis to someone who seemed to instinctively know what I meant by looking at a spreadsheet. I'm, of course, talking about Dorothy Bell, a former school board trustee and who could be the brains of the operation. 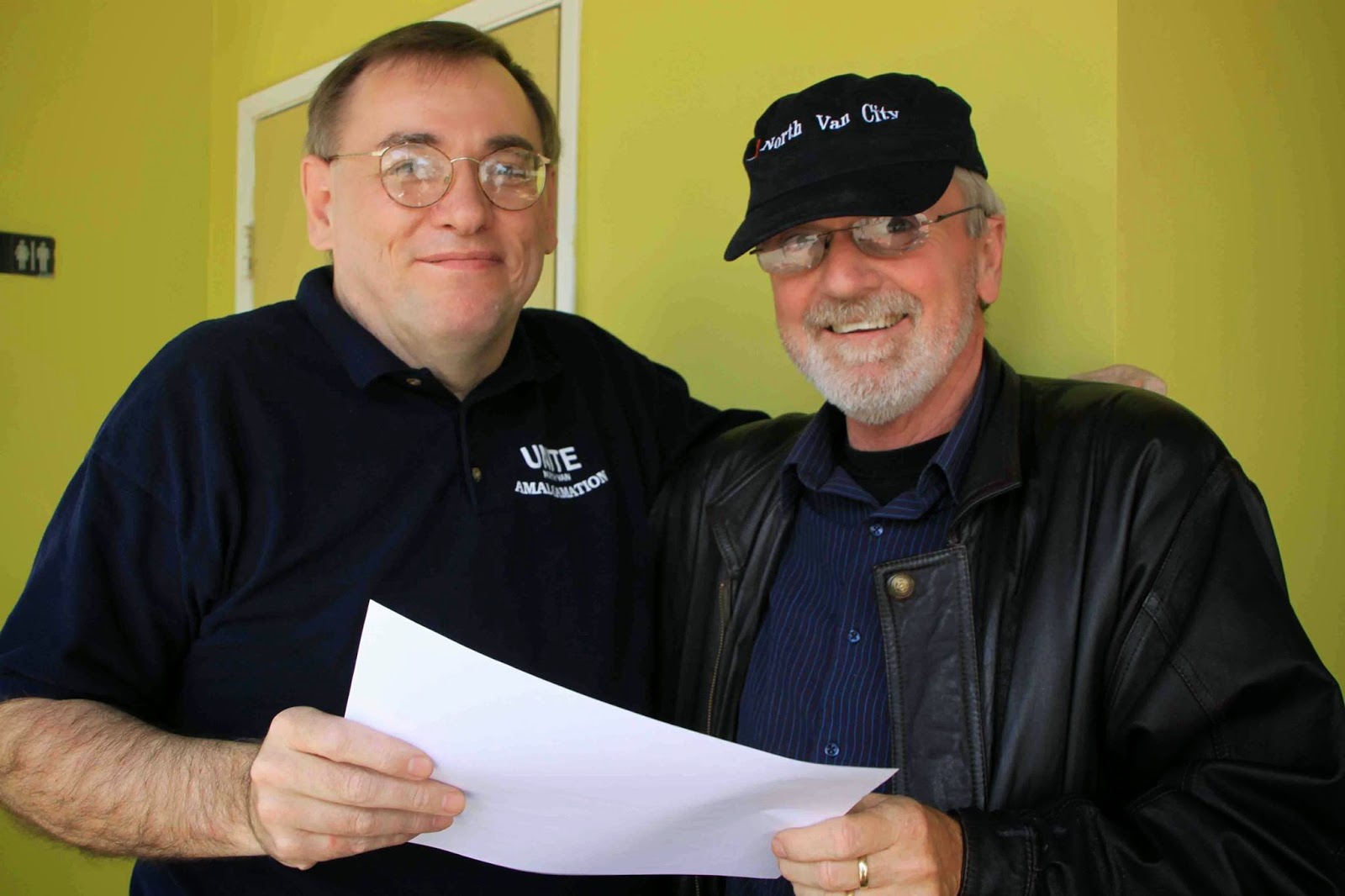 Bill is not an supporter of Amalgamation but has typical concerns of those in the City that will not support a merger with the view it could be an annexation of the City by the District.  But he is someone that when his concerns are addressed, he could become a supporter. He is, of course, might be one of 4 Councillors who could start the legal process or not.

So in December, let's say 4 members of the new Council (Bell, Bell, Clark and myself) submits and passes a motion to start the legal process which would create a joint committee to write a detailed Amalgamation Plan which is required by the Provincial Government.  The Council members would all make it clear what they wanted to see in the Plan.

The Joint Committee would create several sub-committees to deal with several topics.  The structure of an United North Van council is primary.  Bill said that a ward system would be a precondition for him. District Mayor Walton has mused that there would 4 seats in each area and of course a Mayor elected by all North Van. That's a little too dependent on the status quo for me BUT that sub-committee would have almost two years to make a recommendation to the main committee who would make a recommendation to the two Councils. That's plenty of time to get proper public input and to explore several different options.

This is the point where Bill, Don and Rod gets their assurance. The City Council would have to pass the Plan and all its specifics. So Bill, as a Councillor, would be able to assess whatever Council structure is decided and then vote on whether the Plan goes to a referendum or not.  All of Council could assess every point and propose amendments to it. Of course both the City and District would have to pass the exact same document.

At that point, every voter in North Vancouver becomes equal to a Councillor and the referendum must pass in both the City and District to take place.  There would be a year until the election of an United North Van Council.

As in the last step of a referendum, on November 15th, every voter in North Van has a say equal to a Councillor.  By voting just for the 4 members of United North Van, clearly marked on the ballot, you guarantee that first step will be taken.  We have two years of formal, independent professional studies, town halls and public meetings to discuss and probably over-discuss every "nuts and bolts" issue of amalgamation. Then, a Council vote and a referendum.

Do you think you have the right to make a vital decision such a this or just the Council for their but probably not your interests?  There are only a few times when you have control, exercise it on November 15 by voting only for Unite North Van and reunite North Van.